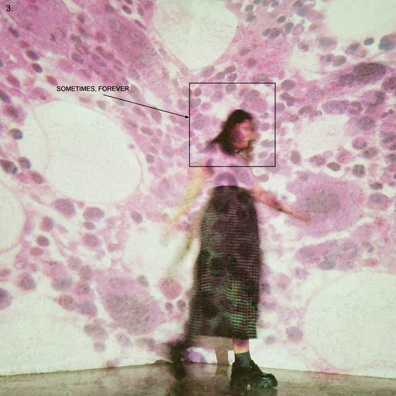 Over the past four years, Soccer Mommy bandleader Sophie Allison has ascended from the world of sparse and scratchy Bandcamp releases into an indie rock forerunner, marrying some of the genre’s most desolate lyrcisim with a bold melodic ear born from turn-of-the-millennium pop. With her last album, 2020’s color theory, she offered insular and morbid musings while bringing her instrumentals and production to some truly dazzling new places. But even the quality of her last release belied the direction she would turn to for her latest effort, Sometimes, Forever.

For her third studio album, Allison has paired with producer Daniel Lopatin, a.k.a Oneohtrix Point Never, who imbues the proceedings with his own brand of esoteric electronic experimentalism. Though Allison retains steadfast pop sensibilities, she always seems to divert into twisted melodies or dark lyrics, a talent that Lopatin manages to reinforce and even expand. Most notably, “Unholy Affliction” feels like nothing else in Soccer Mommy’s catalog, with a spellbinding mix of trip hop electronics, skittering post rock rhythms, and a desolate vocal performance from Allison. Though Lopatin’s touches are most evident on this track, his treasure trove of synths color most of the record, adding stinging John Carpenter-esque accents to the sludgey shoegaze of “Darkness Forever” and an indelibly catchy synth riff on “Shotgun.”

These moments make for Allison’s most exploratory and experimental record yet. Though the record feels thoroughly rooted in many of the same late ’90s influences as color theory, the album also comes with new genre nods to drum and bass, goth rock, and New Wave. The shredding, descending guitar lines that introduce “With U” are an unexpected delight, one that most would never expect from Soccer Mommy, yet they also meld seamlessly with the track’s starry-eyed chorus melodies. In the same vein, the dark grungy layers of “Following Eyes” transform into bright indie rock bliss, once again proving Allsion’s ability to meld darkness and light in a beautiful marriage of contrasts.

While Sometimes, Forever expands Allison’s ambitions as a songwriter, when the band slides into their well-worn lane, few contemporaries can measure up. After years on the road together, Soccer Mommy have clearly hit a solid groove, one that elevates Allison’s backing band from accessories to her songwriting into a full-tilt indie rock powerhouse. Tracks like the opener “Bones” or “Don’t Ask Me” could blend into the background of the band’s discography given the territory they have already tred, yet the band breathes new life into them, locking into an irresistible groove before cresendoing into tremendous highs.

Still, Allison has often shined brightest in the in the smallest moments, the times when her dark confessions cut deepest. “Fire in the Driveway,” “newdemo,” and “Still” all give Allison’s writing space to breathe, crafting songs full of subtle builds, twinkling melodies, and decorative instrumental touches like swelling strings and cosmic bursts of synths. In turn, these quiet offerings can be a stage for both dreamy soundscapes and urgently wrenching lyricism.

This push and pull between beauty and darkness runs throughout the album. Visceral imagery of death, pain, and depression lurk throughout the record, but they’re simultaneously tempered with surprising moments of peace and vulnerability. Sometimes, Forever is a record that thrives in this contradiction, exploring how joy and pain are often close neighbors. On “Unholy Affliction” the pleasure of creation and perfection is robbed by the constant industrial churn of the music industry, and “newdemo” imagines the apocalypse as a beautiful celestial experience. Even as Allison pens tributes to love and devotion, they come in the form of knives and shotguns, drawing blood with each tender confession (“Your crystal eyes/Cut deep like a knife/And they’re teaching me how to bleed/But I’ll take the pain/Feel it every day/Just to have you look at me”).

That intensity is what ultimately makes Sometimes, Forever so gratifying. It’s a record that operates in extremes, with the highs ascending to ultra-catchy pop bliss and the lows exploring barren depths of depression. Each emotion and each moment is transient, leading seamlessly into the next in an overwhelming rush. You are forced to take it all in at once in a cyclical motion of emptiness and meaning, heartache and companionship, sorrow and euphoria. The resulting record is undoubtedly Allison’s most ambitious. As she confesses in the opening moments of “Still,” “I don’t know how to feel things small/It’s a tidal wave or nothing at all.” (www.soccermommyband.com)